While the interest and conversation around native advertising has only continued to escalate, there has been a lack of concrete data about the effectiveness of native ads. To that end, Sharethrough recently conducted a study with Nielsen to compare the brand-building effectiveness of native video ads against pre-roll video ad units. Sharethrough worked with five leading advertisers to serve the same creative message in both pre-roll and native advertising formats for each advertiser’s campaign and used Nielsen Online Brand Effect for in-depth metrics on brand lift and the campaign elements driving that lift. 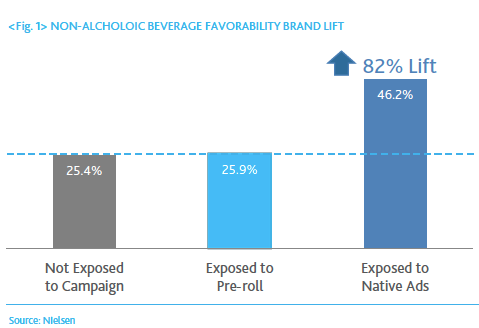 The study also found that users were actually “more likely to have negative brand opinions after being exposed to the pre-roll creative than the native ads.”

In another campaign for a consumer packaged goods product, native ads generated a 42% lift in purchase intent, while pre-roll did not generate any lift.

While we’ve always considered it to be self-evident that choice beats interruption, sometimes you just need data to help hammer home the case. This report helps illustrate the positive impact that native ads can have for brand advertisers and why they should be careful about the use of interruptive advertising mediums.